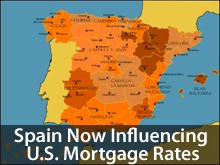 Tuesday afternoon, after the release of the Fed March Minutes, mortgage rates spiked. Some products climbed as much as 0.250 percent. The surge stemmed from the Fed Minutes showing Federal Reserve members hesitant to begin new rounds of market stimulus without a demonstrated, national economic slowdown.

Wall Street hadn’t expected the Fed’s verbiage to be so well-defined. With little evidence that such a slowdown was underway — the economy has shown two straight seasons of consistent, steady growth, after all — equity markets rallied and bond markets sunk, causing mortgage rates to rise.

By Wednesday, however, rates had started to fall.

Civil unrest in Spain plus concern that the nation will fail to meet its debt obligations drew global investors away from equities and into the relative safety of U.S. government-backed bonds — including mortgage-backed bonds. This is a common investment pattern during times of economic uncertainty and one of the major reasons why mortgage rates have been so low, for so long.

If the scenario in Spain sounds similar to what transpired in Greece between mid-2010 and late-2011, that’s because it is. Mortgage rates in AZ may benefit in the medium-term.

This week, with the economic calendar light, look for Europe to dictate market action. Mortgage rates may move lower but there’s more room for rates to rise than to fall. Rates remain near all-time lows.

Tags: Eurozone, Jobs Report, Spain
This entry was posted on Monday, April 9th, 2012 at 5:45 am and is filed under Mortgage Rates. You can follow any responses to this entry through the RSS 2.0 feed. Responses are currently closed, but you can trackback from your own site.