What’s Ahead For Mortgage Rates This Week : February 6, 2012 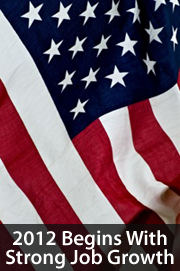 Conforming mortgage rates in AZ rose on the news, although you wouldn’t know it from looking at Freddie Mac’s weekly mortgage rate survey.

According to Freddie Mac, the average 30-year fixed rate mortgage rate fell to 3.87% last week with 0.8 discount points due at closing, plus closing costs. 1 discount point is a fee equal to one percent of your loan size.

3.87% for a 30-year fixed rate mortgage is the official, all-time low for the weekly Freddie Mac survey, conducted since the 1970s. However, because Freddie Mac gathers its results on Monday and Tuesday only, by the time the survey results were released Thursday morning, mortgage rates were already rising off their lows.

As compared to one year ago, there are 2.1 million more people employed in the U.S. workforce. Figures like this hint at a stronger national economy, and that tends to drive mortgage rates up.

This week, with little economic data due for release, mortgage rates are expected to move on momentum. Right now, that momentum is causing rates to rise.

If you’re shopping for a mortgage rate in Mesa and want to know if the time is right to lock, consider that it’s impossible to time a market bottom, but simple to spot a “good deal”.

Mortgage rates remain near historical lows — it’s a good time to lock one in. Call your lender today.

Tags: Eurozone, Non-Farm Payrolls, Unemployment Rate
This entry was posted on Monday, February 6th, 2012 at 6:45 am and is filed under Mortgage Rates. You can follow any responses to this entry through the RSS 2.0 feed. Responses are currently closed, but you can trackback from your own site.