This contradiction occurred because Freddie Mac’s weekly mortgage rate survey is conducted Monday through Wednesday, and because the majority of the surveyed banks reply to Freddie Mac on Tuesday. As a consequence, Freddie Mac failed to capture this week’s mid-week movement that took mortgage bonds to a one-month worst.

Access to Freddie Mac mortgage rates is for “prime” borrowers and requires payment of discount points plus closing costs.

This week, mortgage rates may rise again. There is a lot of news on which for Wall Street to trade, beginning with the week’s biggest story — the Federal Open Market Committee’s 2-day meeting scheduled for Tuesday and Wednesday.

At the FOMC’s last meeting, the Federal Reserve introduced a third round of qualitative easing (QE3), a program through which the Fed will work to keep mortgage rates low until the economy’s recovery is more complete.

The Fed is expected to announce no new stimulus in this, its seventh of eight scheduled meetings for 2012, however, mortgage rates are typically volatile in the hours after the FOMC adjourns.

New housing data is set for release this week, too.

Strength in housing has recently correlated with rising mortgage rates. 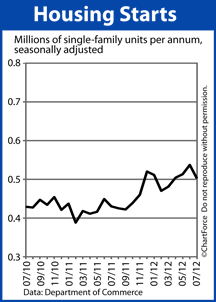 The housing market continues to improve.

According to the U.S. Census Bureau, on a seasonally-adjusted, annualized basis, Single-Family Housing Starts rose to 603,000 last month, an 11 percent increase from the month prior and the highest reading in more than 4 years.

A “housing start” is a home on which construction has started and home builders are breaking ground at rates not seen even during the 2010 federal home buyer tax credit period.

It’s a signal to home buyers throughout Arizona that the U.S. housing market may be permanently off its bottom.

At least, the nation’s home builders seem to think so.

Earlier this week, the National Association of Homebuilders reported home builder confidence at a 5-year high and nearly triple the levels of last September.

Buoyed by rising sales volume and the heaviest foot traffic since 2006, builders expect the next 6 months of sales to outpace the current rate. It may spell higher home prices for today’s new construction buyer.

As compared to last year, today’s buyers have extended purchasing power. Assuming a 20 percent downpayment and a conforming home loan :

That’s an 11.9% increase in purchasing power increase over just twelve months. When combined with today’s rising rents throughout many U.S. markets, demand for new construction homes remains high and builders have taken notice.  Buyers should, too.

With mortgage rates low, low downpayment programs available and home prices poised to rise, it’s an opportune time to be a home buyer. Housing has been trending better since late-2011 and will likely carry that momentum forward into 2013. 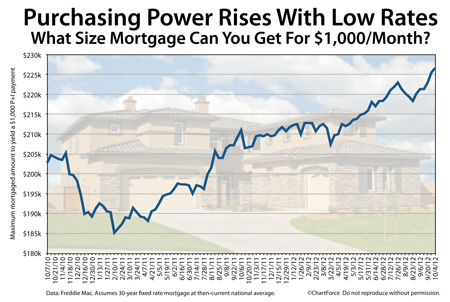 When mortgage rates are falling, they present Phoenix home buyers with interesting options. Because of lower rates, buyers can choose to tighten their household budgets, buying an ideal home but paying less to own it each month. Or, for buyers who shop for homes by “monthly payment”, falling mortgage rates put more homes with affordability’s reach.

As a real-life example, for a buyer whose monthly principal + interest mortgage payment is limited to $1,000 per month, and whom opts for a 30-year fixed rate mortgage, as compared to January of this year, the maximum property purchase price has climbed 6.6%, or $14,000 in list price.

The 6.6 percent increase in affordability outpaces this year’s rise in home prices and is one reason why the U.S. housing market is improving. Slowly and steadily, the U.S. economy is improving and “good deals” in housing are becoming harder to find. In addition, because homeownership is now less expensive than renting in many U.S. cities, home demand among buyers continues to rise.

For today’s home buyer, market conditions appear ripe. Mortgage rates are near all-time lows, low-downpayment mortgage program remain plentiful, and home values have been rising since late-2011. Within 6 months, rates may be up and homes prices, too. Purchasing power would decline, decreasing home affordability nationwide.

The best “deals” in housing, therefore, may be the ones you find today.

Mortgage Rates Bounce Off All-Time Lows; The Start Of A Trend? 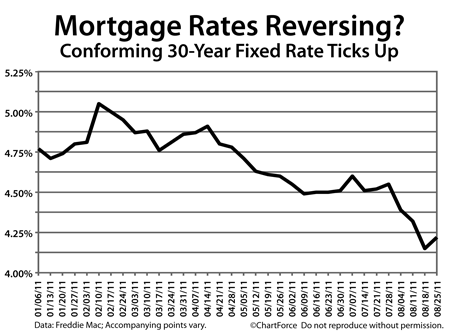 Low mortgage rates are terrific — if you can get them.

One week after posting its lowest mortgage rate in 50 years, Freddie Mac reports that the 30-year fixed rate mortgage rose by an average of 7 basis points nationwide this week to 4.22%. To get the rate, you’ll pay an average of 0.7 “points”.

This week’s rise in the 30-year fixed rate mortgage pulled rates off their all-time lows so either you locked last week’s rock-bottom rates, or you missed it.

As a refinancing homeowner or home buyer in Scottsdale , rising mortgage rates are something to watch. This is because, as mortgage rates rise, so do the long-term interest costs of giving a mortgage, increasing your homeownership costs.

For example, if you failed to lock a rate last week when rates were bottomed, and then decided to lock-in only after rates had climbed 0.25 percent, at the new, higher rate, over the life of your loan, you would have responsibility for an extra $5,300 in interest costs for every $100,000 you borrowed.

Rising mortgage rates can be expensive.

The hard part about mortgage rates, though, is that we can never know what they’ll do next. On some days they rise, on some days they fall, and on some days they stay the same. Instead of trying to “time the bottom”, therefore, a good strategy can be to lock the first, low rate that fits your budget. Then, if rates are lower in the future, you can look to refinance at that time.