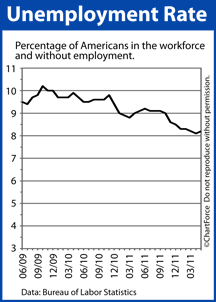 Mortgage markets improved last week in response to ongoing concerns for the European Union and an across-the-board weakening in U.S. economic data — including the much-watched jobs report.

Conforming mortgage rates in Arizona eased lower last week, falling to a new all-time low for 6th week in a row. The moves have been modest, however, falling just 15 basis points during that period.

Back then, Freddie Mac reported the average 30-year fixed rate mortgage to be 3.90% for borrowers willing to pay 0.8 discount points plus a full set a closing costs.

Today, it reports a rate of 3.75% with 0.7 discount points plus closing costs.

The total savings today as compared to April 19 is $8 per month plus $100 in discount points per $100,000 borrowed. This is not a huge monthly discount, but it still lowers a monthly payment. Home affordability remains at its highest point in recorded history.

Last week, there was little improvement in the Eurozone with respect to Greece and its future as a member of the European Union. In addition, Spain and Italy saw their respective borrowing costs rise sharply.

Also, Spain is in the process of natiionalizing one of its largest lenders and investors fear the Spain’s government will soon seek financial assistance.

The uncertainty for the future of Europe’s economic union has been driving demand for the relatively-safe U.S. mortgage bond asset class, a pattern known in trading circles as “safe haven” buying. The added demand pushes bond prices up, and bond yields (and mortgage rates) down.

The weaker-than-expected May jobs report also contributed to last week’s falling rates. Job growth is tied to the economy and when job growth is soft, investors are less willing to take risks in the equity markets. Here, again, bond markets benefit and mortgage rates fall.

This week, there is little economic data set for release so expect mortgage markets to take their cues for political and economic news from abroad. With mortgage rates low, though, the timing may be right for a rate lock.

If you’re floating a mortgage rate, or have yet to lock one in, today may be a good day to call your loan officer. Friday morning, the government releases its Non-Farm Payrolls report at 8:30 AM ET.

It’s no coincidence that the stock market has been wayward. Jobs are a keystone in the U.S. economy and the connection between jobs and growth is straight-forward :

As a rate shopper in Arizona , this is an important understanding. Job loss was, in part, behind the big drop in mortgage rates since 2007. A weak economy drives investors away from equities and into safer securities such as mortgage bonds (which are backed by the U.S. government).

In the first 11 months of 2011, though, 1.5 million people went back to work; the economy showed signs of shoring up and economic optimism is returning. Mortgage markets have temporarily ceded to the Eurozone, but with one more strong jobs report to close out the year, momentum could tip and stock markets could roll.

If that happens, mortgage rates will rise. Maybe by a lot.

This is why Friday’s Non-Farm Payrolls data is so important. Economists expect that 150,000 new jobs were created in December. If the government’s actual number is larger than that, prepare for higher mortgage rates.

If the prospect of rising mortgage rates makes you nervous, remove your nerves from the equation. Call your loan officer and lock your rate ahead of Friday’s Non-Farm Payrolls release.