Archive for the ‘Weekly Review’ Category 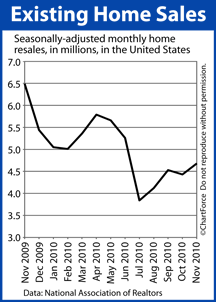 Mortgage markets worsened again last week as the holiday-shortened sessions did little to buck recent momentum. Although Freddie Mac reported mortgage rates dropping 0.02% from the week prior, loan officers on the street will report the opposite. Rates did not fall last week.

For rate shoppers and home buyers, it’s been a harrowing two months.

Since the Federal Reserve announced its QE2 program November 3, 2010, mortgage rates have moved from all-time lows to 7-month highs. Mortgage payments now cost $38 more per month per $100,000 borrowed as compared to the day before the stimulus was announced.

A major reason why mortgage rates were so low, for so long, was that the U.S. economy was suffering. Consumer spending was slow, business forecasts were dour, and job growth was negative. These conditions lasted for longer than a year.

Lately, however, the conditions are changing:

And, furthermore, housing appears to be on solid ground. Existing Home Sales and New Home Sales improved last month, and home supplies are dropping. This, too, is good for the economy, which, in turn, is bad for mortgage rates.

This week, don’t be surprised is mortgage rates rise again. The week is again shortened by holiday and there’s a host of new data that may signal economic improvement including Pending Home Sales, consumer confidence surveys and the Case-Shiller Index. 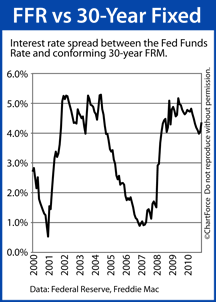 According to Freddie Mac’s weekly Primary Mortgage Market Survey, the average 30-year fixed rate mortgage is 0.66% higher this week as compared to rates on November 11, but loan originators will tell you that figure is understated.

Real mortgage rates — mortgage rates available to everyday homeowners and buyers in Mesa are up by as much as a full percentage point since November, and loan costs are rising, too.

Last week, mortgage markets revolved around the Federal Open Market Committee. The FOMC met Tuesday and voted to leave the Fed Funds Rate unchanged within a target range of 0.000-0.250. This was expected. However, markets seemed to be surprised by the Fed’s take on inflation.

In its press release, the Fed said inflation is running too low to benefit the economy. Its policies, including the group’s $600 billion bond market program, may be meant to spark inflation, then. This would lead mortgage rates higher and Wall Street knows it.

This week, with a sparse data schedule and trade volume thinning because of holidays, expect mortgage rates to be volatile.

Although rates are higher since 7 weeks ago, they remain low, historically. There’s still a chance to capitalize on the lowest mortgage rates in decades. If you haven’t refinanced this year and want to know what’s available, talk to your loan officer right away.

Conforming mortgage rates rose in AZ and around the country for the fifth straight week. It’s a streak that’s been marked by volatile pricing that’s rendered rate shopping difficult.

This week, with a bevy of data set for release and a Federal Open Market Committee meeting, expect volatility to remain high. Wall Street remains undecided on the future of the U.S. economy and there will be plenty on information on which to trade:

Despite the high impact of this week’s economic releases, though, it will be Tuesday’s FOMC meeting that sets the tone for the mortgage bond market and, consequently, for mortgage rates in Mesa.

The Fed’s last meeting in early-November provided the spark to the recent rise in mortgage rates. In the group’s post-meeting press release, it acknowledged growth while committing $600 billion to bond markets. The move triggered a massive bond sell-off that has since pushed conforming mortgage rates to a 5-month high.

If you’re still floating a mortgage rate or have otherwise yet to lock, consider executing a rate lock agreement early in the week. Once the Federal Open Market Committee adjourns, mortgage rates could spike again. And, although rates are up since November, they remain historically low.

What’s Ahead For Mortgage Rates This Week : November 1, 2010

Conforming rates in AZ worsened Monday, Tuesday and Wednesday — rising as much as 3/8 percent as compared to the week prior — before settling lower through Thursday and Friday.

And despite all the data released last week, it wasn’t the fundamentals that were causing rates to move. Instead, Wall Street was firmly focused on the Federal Reserve’s scheduled 2-day meeting this week; preoccupied with the likelihood of new Fed stimulus program.

The Fed’s meeting adjourns Wednesday and the group is widely expected to announce a new round of bond market support at that time.  Uncertainty over how big that package will be, however, is what’s causing rates to jump.

This is why it’s all eyes on the Fed this week. Once the Fed adjourns, there’s no more “expectation” — there’s only Fed commitment.

Other than the Federal Reserve’s get-together, there isn’t much new data due for release. The week’s calendar looks like this:

It’s unlikely that data will swing mortgage rates until after the Fed’s Wednesday adjournment, but, once that happens, expect bond market attention to shift to the October jobs report set for 8:30 AM ET release Friday morning.  If jobs data is strong, mortgage rates should rise.

All things considered, it’s dangerous to float a mortgage rate this week. If you’re not already locked, talk to your loan officer prior to Wednesday afternoon. 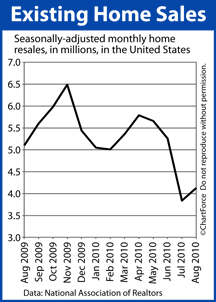 Mortgage markets improved last week overall, but barely. After making a sizable move lower through Monday, Tuesday and Wednesday, mortgage pricing jumped Thursday and Friday. Nearly all of the early-week gains were erased.

There wasn’t much economic news on which for markets to trade last week. In its absence, bond traders took cues from the currency markets, among other things.

Mortgage rates are closely tied to the value of the U.S. dollar. This is because mortgage bond investors are repaid in U.S. dollars and, as the dollar gains value, demand for dollar-denominated bonds tend to grow.

Bond prices and bond yields move in opposite directions.

The dollar was strong in the first part of last week, then weakened through Friday’s close with the G-20 meeting looming.  Mortgage rates trended along similar lines.

This week, there’s a return to data and mortgage markets should respond — especially because the week is housing-data heavy. Housing is believed to be a key part of the country’s ongoing economic recovery.

Mortgage rates are near all-time lows and it’s unclear whether they’ll stay this low, or start rising. Either way, if you haven’t talked to your loan officer about a refinance at today’s great pricing, set aside some time this week to do that.

Once rates reverse higher, they’re unlikely to fall back down.