Archive for the ‘Retail Sales’ Category 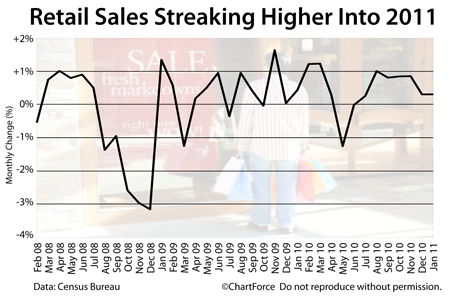 If consumer spending is a keystone element in the U.S. economic recovery, a full-on rebound is likely underway.

It’s good news for the economy which is scratching back after a prolonged recession, but decidedly bad news for people in want of a mortgage across the state of AZ. This includes home buyers and would-be refinancers alike.

Because consumer spending accounts for the majority of the U.S. economy, Retail Sales growth means more economic growth and that draws Wall Street’s dollars toward riskier investments, including equities, at the expense of safer investments such as mortgage-backed bonds.

On the heels of the Retail Sales report’s release, bond prices are falling this morning. As a consequence, mortgage rates are rising. It’s the same pattern we’ve seen since mid-November — “good news” about the economy sparks a stock market frenzy, casuing mortgage bonds to rise.

A sampling of other recent good-for-the-economy stories include:

The days of 4 percent, 30-year fixed rate mortgages are over. 5 percent is the new market benchmark. Unless the economy keeps showing strength. Then, that number may rise to six percent.

If you’re thinking of buying or refinancing a home, consider how rising rates will hit your budget. You may want to take that next step sooner than you had planned — if only to protect your monthly payments.

Retail Sales Weak In December; Home Affordability Gets A Boost 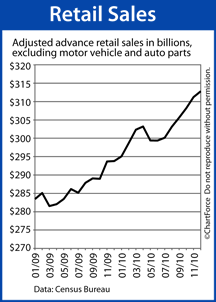 Despite falling short of estimates, however, December’s reading is the highest in Retail Sales history, surpassing the previous record set in July 2008, set during the recession. In addition, December’s strong numbers helped 2010’s year-over-year numbers go positive for the first time in 3 years.

Although the data is a mixed bag for Wall Street, home affordability in Scottsdale is improving today.

As spending grows, the economy tends to, too.

Investors recognize this and start chasing “risk”. It becomes a boost for the stock market, but those gains are made at the expense of “safe” asset classes which include mortgage-backed bonds. Mortgage-backed bonds are the basis for conforming and FHA mortgage rates so, as bond markets sell off, asset prices fall and rates move up.

Thankfully, rate shoppers will avoid that scenario today — at least for today. December’s Retail Sales results are a factor in the bond market’s early-day improvement. Conforming and FHA mortgage rates across the state of Arizona should be lower today.

Despite the good news, if you’re shopping for a mortgage, consider locking your rate as soon as possible. Mortgage rates are coming off a 2-week rally and look poised to reverse appear — especially with a full docket of data due for next week. As mortgage rates rise, purchasing power falls.