Archive for the ‘Housing Starts’ Category 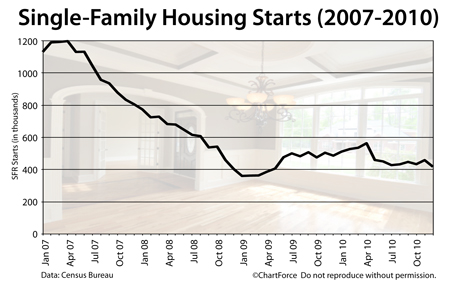 Each month, in conjunction with the Department of Housing and Urban Development, the Census Bureau releases its New Residential Construction report. The report is comprised of several sections, one of which counts the number of homes that have “broken ground” in AZ and nationwide.

They’re called “Housing Starts” and, by most measures, they faded quickly as 2010 came to a close.

According to the Census Bureau’s report, Housing Starts of single-family homes fell to 417,000 units on a seasonally-adjusted, annual basis. The figure marks a 9 percent drop-off from November, and is the lowest reading since May 2009.

Not surprisingly, the press went bearish on housing post-release:

Despite being truthful, these headlines are somewhat misleading. They each ignore a key element of December’s New Residential Construction report — Building Permits. Building Permits rose 6 percent to an 8-month high last month.

A building permit is a local-government certification that authorizes home construction.

Permits are a precursor to Housing Starts with 82% of homes starting construction within 60 days of permit-issuance. More permits in December, therefore, should lead to more Housing Starts in January and February.

It’s unclear whether permits were up because the economy was improving, or because builders raced to beat new building code for 2011. Regardless, expect additional “new home” supplies this spring which would ordinarily help home prices drop if not for the normal surge in spring buyers to gobble those new homes up.

Look for home prices to stay flat, but with rising mortgage rates contributing to higher costs of homeownership overall.

Housing Starts Rise In November, But With A High Margin Of Error 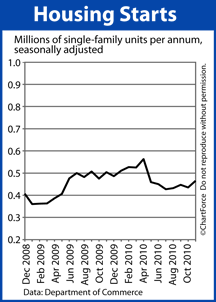 The number of single-family Housing Starts increased in November, adding 30,000 units as compared to October.

The Census Bureau defines a “housing start” as a home on which construction has started.

November’s starts represents a 7 percent increase from the month prior. However, if you see the Housing Starts story online or in the papers, you’ll notice that the press is calling the market gain at 4 percent.

So which result is right? The answer is both.

The government’s monthly Housing Starts data is published as a composite report; lumping activity among 3 separate housing types into a single, group reading.

The 3 housing types are:

The group reading is a fair description of the market and it’s easy-to-understand. As a result, it’s what the press tends to report. However, for home buyers in Arizona , it’s the single-family category that’s most relevant.

The reason why single-family homes accounted for 84% of November’s Housing Starts is because that’s the type of home that most buyers buy. Few purchase 2-4 unit properties, and even fewer buy entire apartment complexes.

That said, it’s possible that November’s Housing Starts data is wrong. Within the press release, the government placed an asterisk next to the data, indicating that the figure’s margin of error exceeds its actual measurement.

Against a 7 percent gain, the reported margin of error is 13.5%. There is no statistical evidence, therefore, to prove the actual change was different from zero.

If Housing Starts did fall in November, it will help to reduce the Scottsdale housing inventory, which will, in turn, help keep home prices high. For home sellers, this could mean good news. Fewer homes for sale increase competition among buyers. 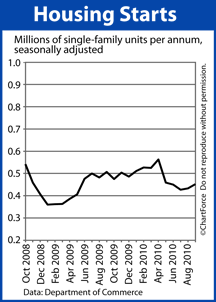 According to the Commerce Department, the number of single-family Housing Starts increased to 452,000 units in September, a 19,000 improvement over August.

A “housing start” is a new home on which construction has started.

Housing Starts data is surveyed and broken-down by housing type:

The government logs each type separately, but also lumps them into a single, comprehensive figure within its reports. For this reason, headlines surrounding the story seem contradictory.

It’s single-family homes that most Americans purchase, though, and that’s why single-family starts are the numbers worth watching. As 75% of the market, it’s more relevant than the joint numbers most commonly reported by the press.

In September, single-family starts did move to a 5-month high but buyers and sellers in Phoenix should keep the figures in perspective. Just because starts are rising doesn’t mean the housing sector has turned around for good.

The first reason why is because, in September, starts were 75 percent less as compared to 5 years ago at the peak of housing. And if you feel that’s an unfair comparison, even as compared to the last 12 months, September’s data was tens of thousands below average.

Second, September’s Margin of Error happened to exceed its actual measurement. This means that the 4 percent in starts may actually turn out to be a loss of 4 percent (or more!) once the data is collected in full.

If there’s a reason to think the New Homes market is coming back, though, it’s that home builder confidence is also at a 5-month high. Foot traffic is rising and builders are optimistic about the next six months.  This could mean higher sales prices and less chance for negotiation.

Buyers in search of new homes may find it tougher to make a deal the closer we get to 2011.