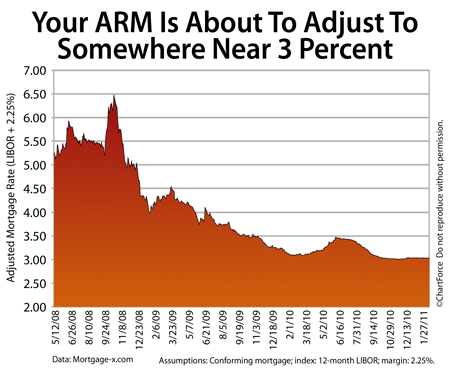 If your ARM is due to adjust this spring, your best move may be to allow it. Don’t rush to refinance — your rate may be adjusting lower.

It’s because of how adjusted mortgage rates are calculated.

First, let’s look at the lifecycle of a conventional, adjustable rate mortgage:

The starter period will vary from 1 to 10 years, but once that timeframe ends, and the first adjustment occurs, conventional ARMs enter a lifecycle phase that is common among all ARMs — regular rate adjustments based on some pre-set formula until the loan is paid in full, and retired.

For conventional ARMs adjusting in 2011, that formula is most commonly defined as:

LIBOR is an acronym for London Interbank Offered Rate. It’s the rate at which banks borrow money from each other. It’s also the variable portion of the adjustable mortgage rate equation. The corresponding constant is typically 2.25%.

Since March 2010, LIBOR has been low and, as a result, adjusting mortgage rates have been low, too.

Therefore, strictly based on mathematics, letting your ARM adjust this year could be smarter than refinancing it. You may get yourself a lower rate.

Either way, talk to your loan officer. With mortgage rates still near historical lows, Scottsdale homeowners have interesting options. Just don’t wait too long. LIBOR — and mortgage rates in general — are known to change quickly. 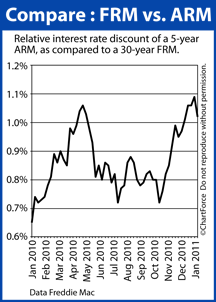 For some homeowners, electing to take an adjustable rate mortgage over a fixed rate one can be matter of budgeting. ARMs tend to carry lower mortgage rates and, therefore, lower monthly mortgage payment as compared to a comparable fixed rate loan.

ARMs are not for everyone, of course. Over time their rates can change and that can frighten people. An ARM can finish its respective 30-year lifespan with a mortgage rate as much as 6 percentage points higher from where it started. Some homeowners won’t like this.

Other homeowners, however, won’t mind it. For this group,  the ARM can be a terrific fit. Especially with the huge, relative discount in today’s pricing.

A few scenarios that should warrant consideration of a 5-year ARM include homeowners that are:

In addition, homeowners with existing ARMs due for adjustment may want to refinance into a new ARM, if only to push the first adjustment date farther into the future.

Before choosing to go with an ARM, speak with your loan officer about how adjustable rate mortgages work, and their near- and long-term risks. Payment savings may be tempting, but with an ARM, payments are permanent.